It is exactly a year that a great African Evangelical Theologian- Dr. Tokunboh Adeyemo went to be with the Lord. An inaugural Memorial Lecture was organized in honor of his memory today 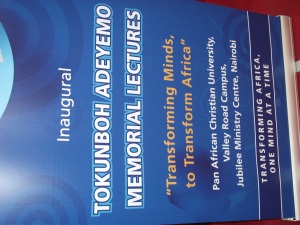 March 19, 2011 in Nairobi, Kenya. The Lecture was organized by Center for Biblical Transformation (CBT), the institution he founded and led until his transition into glory on March 17, 2010. The lecture was held at the Pan-African Christian University (PACU), Valley Road Campus, Nairobi. The theme of the lecture was: “Transforming Minds to Transform Africa.” The meeting was another testimony to the immense contributions of Adeyemo to the healthy growth of Christianity in Africa and indeed the world at large. The meeting was attended by people from all works of life from within and outside Kenya and two members of the Adeyemo’s family; Ireti [wife] and Dele [son] were in attendance.

Dr. Kwesi Atta-Krah, the current Chairman of CBT, and as he described himself, a mentee and ‘apprentice’ of Dr. Adeyemo, gave the introductory speech as well as launch the Tokunboh Adeyemo Memorial Lectures. Atta-Krah spoke of the giant strides that CBT has been making since the demise of Adeyemo. According to Atta-Krah “one of those strides is the establishment of Tokunboh Adeyemo Memorial Lecture and this is the first in the series of lectures that will be given annually.” The lecture was organized in partnership with Christ Is the Answer Ministries (CITAM), Association for Evangelicals in Africa (AEA), Africa International University – AIU (formerly, Nairobi Evangelical Graduate School of Theology (NEGST), Pan-African Christian University (PACU),  and International Central Gospel Church. In the meantime, the aim of the lecture is to celebrate the life of Adeyemo; to renew the zeal and commitment of the Church in Africa to transformational leadership; and also to create partnership bet ween the Church and other Christian organizations in order to form a common cause in continuing Adeyemo’s vision of holistic transformation.

Rev. Boniface Adoyo welcomed people to the meeting and additionally gave remarks on the life and times of Dr. Adeyemo. Adoyo was the immediate past Bishop of Christ Is the Answer Ministries (CI TAM), with its headquarters in Nairobi, Kenya- the denomination where Adeyemo worshiped until his demise. In the words of Adoyo, “Adeyemo performed beyond the expectation of his generation.” He added that we have lost a great voice in African Christianity, in Evangelical Theological scholarship; and we have missed the voice of a genuine servant of God.

Adeyemo was not only a theoretician but also a sincere practitioner of the Christian faith. A doyo opines that, “what Adeyemo taught and live for did not die with him. His vision for transformational leadership, good governance, corruption free society, marketplace evangelism and discipleship and balanced Christianity did not go with him; he left us the legacies today through the establishment of CBT. Adoyo added that Adeyemo has begotten so many children today that have great potentials of multiplying his vision across the continent of Africa and indeed across the world.  He challenges African Christians that “if an individual like Adeyemo could make that much contribution to the development of Christianity in Africa and in several strata of the society; what values are we adding to our society today? Adoyo concluded that Adeye mo lived and died for a value added cause – holistic transformation through transformational leadership. Adeyemo lived for that which does not die; and so, Adoyo, challenges the audience to live for dreams that will never die –  dreams that will out last the dreamers!

The first Key Note Speaker was Dr. David Kasali from the Democratic Republic of Congo (DRC). Kasali holds a PhD degree in New Testament from Trinity International University, USA and a former Vice-Chancellor of Nairobi Evangelical Graduate School of Theology (now Africa International University). He had worked with Adeyemo over a period of 16 years in various capacities; first as his student at NEGST and later as a colleague. Kasali is currently the President of Congo Initiative and Rector, the Christian Bilingual University of Congo.

It was obvious from the way he eloquently and emotionally presented his speech that Kasali just like his mentor Adeyemo, has a heart for the Democratic Republic of Congo and Africa as a whole. According to Kasali, ‘like the experience of the Biblical Moses on the mountain top, God showed Adeyemo an Africa of redeemed future; an Africa that will be liberated from all forms of oppression, an Africa that will be a gift to the world; an Africa that rediscovers God; an Africa that will reshape democracies and indeed, an Africa that will be a gift to the world in all strata of the human life and society.’ Like the recent unstoppable Japanese Tsunami, Kasali observed that the future of an enviable Africa moved powerfully in the heart of Adeyemo. Adeyemo lived and died for the soul of Africa and we should be challenged to rise up to take the baton from him. The scholarly contribution of Adeyemo was revisited with great encomiums by Kasali; and according to him, the desire of Adeyemo is that Africans may show the spirit of determination in order to claim the continent for Christ.

Kasali mourned that one year after the demise of Adeyemo, the battle for the soul of Africa continues. He cited the examples of the unrests Ivory Coast, Libya, Egypt, Tunisia to mention just but few as indicators of the many challenges the Church in Africa would have to respond to. According to him, ‘Congo has been referred to as the world’s capital of rape; Corruption, HIV-AIDS, Witchcraft, Prostitution, Child trafficking are still the order of the day in Africa. Terrorism, rape is being carried out not by strangers but by fellow Africans and country men. Ironically, Africa is the richest continent of the world in terms of mineral resources and yet it’s the poorest of the continents.

Kasali asked, “Where is the Church of Jesus in all these challenges?” Kasali accused the Church in Africa of practicing Evacuation Theology – a theology that has no regards for societal development. He argued that the African Church on a general note has little influence on educational and political strata of the society because of its long time dichotomy between the secular and the sacred. Consequently, Africa has one of the fastest numerical growth rates of Christianity in the world today yet with little impact. This is particularly so according to Kasali, because there has been little or no focus on the human mind. The Church in Africa needs more than numbers; it needs transforming biblical Christianity. Kasali called on the Church in Africa to set values and not run away from it.

However, Kasali noted that in spite of the dark spots in Africa, there have been pockets of progress in the continent and such gains have come through the contributions of great minds like Adeyemo. In the area of scholarship for instance, we see more and more African scholars publishing and now the world is hearing from Africans not only about Africa but also African voices on global issues. Kasali announced that the Church must fight to rescue Africa for Christ. Adeyemo’s noble vision of holistic transformation- transforming one mind at time, one leader at a time must be taken by the Church in order to raise men and women who will portray the qualities of the biblical Joseph in Africa.  He postulated that the battle can be won- one mind at time! The battle can be won with one leader at time! Kasali concluded that some of the NEGST/AIU Alumni like Dr. Peter Okaalet (of Uganda), Rev. Prof. LARBI, E. Kingsley (of Ghana), Rev. Dr. Boniface Adoyo (of Kenya), Dr. David Kasali (of D.R. Congo), and Dr. Douglas Carew (of Sierra-Leone) are making great contributions to development of the African minds and society today because God brought them in contact with visionary and purposeful leaders like Tokunboh Adeyemo.

Please note that no copy of the papers presented by the different speakers at the meeting was given to any members of the audience. This article is therefore expressed in my own words and interpreted based on my understanding of the speeches as presented by the speakers. Although I have tried my best to correctly represent the views of the various speakers, there may be some misrepresentations in this article especially because this piece was written in the cause of  the verbal presentations; and  the fact that this is the summary form  of the speeches transmitted. Therefore, if there is any misrepresentation in this article, they are not necessarily those of the speakers at the meeting.